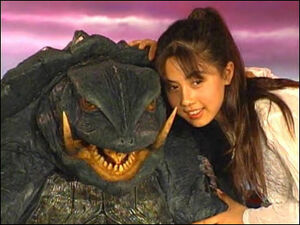 
Identity/Class: Human psychic
Occupation: Avatar/human-link for Gamera
Affiliations: Gamera, Professor Nagamine, Ayana
Enemies: Gyaos, Legion
Known Relatives: Unnamed father (director of a Marine Insurance company)
Aliases: None
Base of Operations: Japan
First Appearance: Gamera: Guardian of the Universe (1995)
Powers/Abilities: Asagi had a psychic link to Gamera- she keeps him mindful of humans, gives him power and has the empathic ability to know what he's thinking and feeling. She was able to revive him when he seemed dead, using the hope and energies of a gathering of children (or that's what it looks like, anyway). In the early days of the link, they were so greatly linked that she would also feel his pain and receive his wounds; by 1996, this had ceased. Though her link was severed, she still had some connection to Gamera in 1999 - she had a rudimentary empathic understanding of him and was able to get him to revive Ayana.

A dedicated and empathic young girl, Asagi came into contact with the Atlantean oryhalcyon beads and thus gained psychic link to Gamera. She kept him grounded in humanity and helped him in battles, also assisting in proving Gamera was on humanity's side. When he was hideously wounded in the battle against Legion, Asagi was able to use her link to revive him (with the assistance of the hope of small children) but the link was severed in doing so.

Three years later, Asagi became involved with Professor Nagamine (the ornithologist who first encountered the Gyaosu in the first Gamera movies) and her investigations into the return of Gyaosu and the more ruthless Gamera. Both of them became involved in the strange case of Ayana, a girl who loathed Gamera and who was the avatar of the terrifying Iris monster. In the final battle between Gamera and Iris, Asagi tried repeatedly to get Ayana to break her link with Iris; when Iris was beaten and Ayana presumed dead, Asagi was able to get Gamera to revive her.

Retrieved from "https://gamera.fandom.com/wiki/Asagi_Kusanagi?oldid=4489"
Community content is available under CC-BY-SA unless otherwise noted.