Do not confuse with Toho's Baragon.

Barugon (バルゴン,   Barugon?) is a monster that first appeared 1966 Daiei Gamera film Gamera vs. Barugon. Barugon is not to be confused with the similarly named Toho monster, Baragon. The similarity in name is probably a coincidence, as katakana only offers a limited number of three syllable cobinations. They are both similar to ground-like dinosaur.

Barugon is a gigantic quadrupedal reptile resembling a Jackson's chameleon, with sharp teeth, a long horn on his snout, smaller horns above his eyes, and a long whip-like tail. He has two rows of short spikes running down his back, which begin to glow when the creature is ready to attack. Barugon also possess a very long, stiff tongue with a clubbed tip, and has dark-purplish blood.

In ancient times the Barugon egg was placed in a cave on his native island. Hundreds of years later an expedition to the Island to get the egg (thought to be a giant opal) was undertaken. The egg was then taken back to Japan to be sold. As the ship docked in Osaka one of the sailors left it under an infrared lamp meant to cure his jungle foot fungus to go play poker. While gone the lamp incubated the egg and it hatched into a baby Barugon. It then grew to full size causing the boat to explode. Barugon then headed into downtown Osaka. Rampaging the military atempted to destroy it with a missle strike but barugon destroyed it with his rainbow ray. The Radiation of the ray attracted Gamera. Gamera came flying in.The two titans clashed and just when Gamera got the upper hand Barugon froze him solid. The military and Gamera out of the way Barugon left Osaka and headed for Tokyo. The miliary tried to lure Barugon to a deep lake knowing he would drown in fresh water with a large dimond on two occasions the second attempt applying infrared light. Both failed. Just as all hope seemed lost Gamera burst from his icy prison and began to fight Barugon in round 2. Barugon is later presumed to be drowned to death when Gamera crushes him in a giant, deep freshwater lake.

Barugon has three major powers. One of them is his extendable tongue. His tongue has a the ability to fire out like a giant battering ram, or a chameleon. Zedus also has a similar tongue, but it has a spear-like point. His second power is an icy spray that he can fire from the end of his tongue. It was strong enough to freeze Gamera solid for eight hours. Barugon's final power is the ability to use the spikes on his back to project a rainbow out of his back that can destroy a whole line of missles, as seen in War of the Monsters.

Barugon has a deadly weakness to fresh water (though apparently salty ocean water has little effect on him). In the movie, they kept him under restraint with artificial rain. In the final fight with Gamera, Barugon is drowned by Gamera in a deep lake. Barugon is also attracted to shiny objects. He was almost lured into a lake with a diamond on a boat with an infrared light shining through it, but he used his tongue to grab the diamond and walk away unharmed. He is also severely wounded when his rainbow ray was deflected back by a reflective mirror. 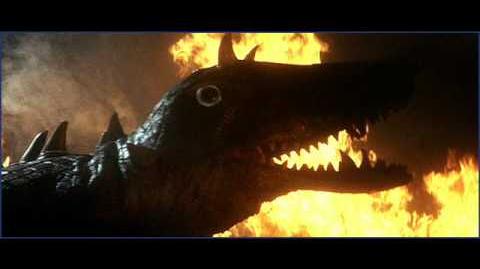