Gamera: Super Monster (宇宙怪獣ガメラ,   Uchu Kaijū Gamera?, lit. Space Monster Gamera), a 1980 Japanese daikaiju eiga (giant-monster movie), was the belated final entry in the Shōwa Gamera series, and the last Gamera film written by Nisan Takahashi and directed by Noriaki Yuasa. It relied heavily on stock footage from previous Gamera films. This movie was made with the intention of getting Daiei out of bankruptcy, which failed. There wasn't another Gamera movie made for another 15 years, until his revival in 1995. It was released to Japanese theaters on March 20, 1980 on a Double bill with the Astro Boy episode "Earth defense Army".

When the evil alien Zanon comes to enslave the Earth, all hope seems lost. The Earth's resident superheroes, the Spacewomen, are powerless to stop him. They must enlist the help of a young boy who has a special connection with Gamera. The friend of all children then fights and kills the revived Gyaos, Zigra, Viras, Jiger, Guiron, and Barugon. He then sacrifices himself to kill Zanon by destroying his spaceship. 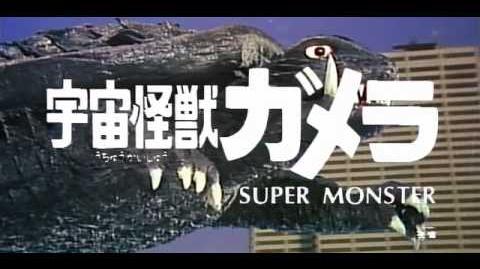 This article is a stub. Please help Gamera Wiki by adding information.
日本語
Community content is available under CC-BY-SA unless otherwise noted.
Advertisement