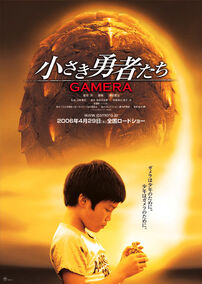 Gamera: The Brave, released in Japan as Chīsaki Yūsha Tachi ～Gamera～ (小さき勇者たち～ガメラ～ ?, lit. "Little Braves of Gamera"), is a tokusatsu kaiju film released in 2006, produced by Kadokawa Pictures. This is the 12th and final Gamera film and the first produced by Kadokawa Pictures after they purchased a percentage of the remaining assets of Daiei Motion Picture Company, the original company responsible for the Gamera films. This film is the the first and only Gamera film in the Millenium series.

In 1973, Gamera self-destructed to kill a flock of Gyaos, which were attacking a small village. One of the survivors was a little boy. Thirty three years later, the little boy has grown up and owns a small restaurant in the Japanese coastal town of Iseshima. He has a son named Toru.

Toru's mother has recently died in a car crash, and this is his first summer without her. When playing on the beach with his friends, he sees a strange red glow emanating from a nearby rock formation. He decides to investigate it. Toru finds an egg lying on top of a strange red rock with patterns carved into it. When he picks up the egg, a baby turtle hatches. Toru names him "Toto", which is what his mother used to call him.

Toru takes Toto home but keeps him a secret from his father who doesn't allow pets in the house. The only people he tells are his friends and his next door neighbor, a girl named Mai who is slightly older than Toru and looks after him. Toto soon reveals himself to be no ordinary turtle, as he flies and shoots fireballs from his mouth. Mai begins to suspect that Toto is actually the son of Gamera and she tries to convince Toru that keeping him is not a good idea. Toru tries not to believe her, reasoning that Toto can't be a Gamera; otherwise he would be 200 feet tall.

Toru can't bear the thought that Toto might be a kaiju. But soon Toto starts to grow and quickly becomes the size of an adult turtle. Too large to hide, Toru and his friends move Toto to an abandoned shack on the beach to keep him. Unfortunately, one day Toru comes up to check on Toto and realizing he is gone, is devastated.

Meanwhile, off the coast of Iseshima, many bizarre shipping disasters have been occurring. No one knows what is happening, or what is causing the disasters. As Toru is sulking over the loss with his friends, tornado sirens begin blaring. Heavy stomping begin to be heard, and soon the dinosaur-like monster Zedus appears.

Zedus eats several people trying to run away. Out of no where, Toto appears and is much larger. Sporting tusks, Toto is ready for battle. Toto gets pummeled in his first battle, falling victim to Zedus' long, piercing tongue and the government shortly arrives to capture and investigate him. In order to combat this new menace, they hook Toto up to a machine which feeds him a liquid version of the strange red stone that Toru had found the egg laying on, which scientists theorize gives Gameras their power.

Zedus attacks again, and a newly revitalized Toto flies out to battle him. Zedus uses his agility and long kicking legs to his advantage to put Toto at a disadvantage. Toto needs to eat the stone his egg rested on if he is to truly become a Gamera. Unfortunately, Toru had given the stone to Mai earlier for good luck for her hospital operation. From a news report Mai also knows of the stone's power, and all these children create a courier service where one child delivers the stone to another, always repeating the words "For Toto!"

The stone eventually gets to Toru, who runs into the evacuated city to give it to Toto. His worried father catches up to him and tries to stop Toru out of fear that he will be killed if Toto self-destructs like his father did in 1973. Toru's father eventually decides they might as well continue as they are already in a perilous situation.

They go to the top of the building where Zedus had lodged Toto earlier, and after a short monologue, Toru throws the stone into Toto's mouth. Toto breaks out of the building, now a fully fledged Gamera. Toto then flies towards Zedus and tackles him, knocking him off the building. Toto tears off Zedus' deadly tongue, and blasts him with a fireball, killing him. The government surrounds Toto to study him, but Toru stalls them long enough for Toto to escape. The film ends as Toto flies into the sky and Toru says "Sayounara, Gamera".

Retrieved from "https://gamera.fandom.com/wiki/Gamera:_The_Brave?oldid=6479"
Community content is available under CC-BY-SA unless otherwise noted.