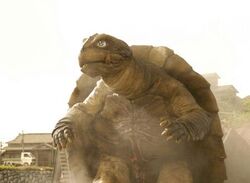 In the modern day, the child of a man who witnessed that battle finds a turtle egg that hatches into a baby Gamera that he names Toto. When a lizard-like monster named Zedus appears, Toto tries to fight the monster, but ends up being gravely wounded and taken by the military for study. He ends up escaping and growing to a larger size to try and fight Zedus again, this time Toto destroys Zedus by shooting a fireball at his mouth.

Toto as a baby

Toto's fireball
Add a photo to this gallery

Retrieved from "https://gamera.fandom.com/wiki/Toto?oldid=6585"
Community content is available under CC-BY-SA unless otherwise noted.