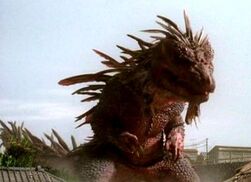 Zedus is a giant sea monster and main antagonist of the 2006 Gamera film, Gamera the Brave.

Zedus is a large aquatic saurian monster. He strongly resembles Jirass from Ultraman and vestigial "fins" from his head and his tail. These fins help Zedus to breath underwater. Despite monsters in Millennium series are considerably smaller in size than the previous series in general, Zedus is a fairly large monster whose total length reaches 150 meters. Also he has a rather long and powerful tail. He fights almost exclusively with his claws, teeth and tail. His most powerful weapon is his elongated tongue which he can launch in a "spear"-like attack, reminiscent of fellow Gamera foe Barugon. He is an extraordinary jumper. He feeds on humans almost exclusively in the film.

A man-eating monster from the depths of the ocean, Zedus attacked several ships at sea before finally making landfall, causing all sorts of damage. Feeding on cowering people, the beast’s wrath knew no end. Fortunately for what remained of the city, Toto, the young Gamera found and raised by a young boy, appeared. Battling the young turtle, the predator unleashed its spear-like tongue on the reptile. After several missed, Toto grabbed the tongue and held on as it pulled back into his maw. The creature was blasted in face with a ball of fire, sending the monster into the sea below.

Zedus’ returned in full force, attacking the complex that Toto was being held in before unleashing his wrath on the rest of Nagoya. The two clashed once again, and like before, Zedus was quickly getting the upper hand. Overpowering the turtle with brutality, the creature tossed Toto into a building. The hero’s body now stuck in the building, Zedus began to climb up.

The predatory kaiju had no idea that Toto had just been empowered by the jewel that gave birth to him and was knocked off of the building by the flying Toto. Quickly getting to his feet, he lashed out with his tongue yet again, this time impaling it through Toto’s shoulder. As the two struggled on, Toto ripped the tongue in half and unleashed a powerful fire ball. The ball of flames quickly engulfed the creature and blew it to bloody pieces.

This article is a stub. Please help Gamera Wiki by adding information.
Community content is available under CC-BY-SA unless otherwise noted.
Advertisement